11 Most Abused Golf Rules We All Violate

11 Most Abused Golf Rules We All Violate

In golf there are a few golf rules almost every player unconsciously violate.

Have you ever been in a situation on a golf course where you didn’t know how to drop, when to take a free drop, how many penalty strokes you gained?

What if I tell you that there are at least 3 golf rules you violate without knowing?

I wonder if you knew that there are 34 rules of golf according to the USGA. Those 34 rules define relatively large part and most of the golfers don’t know the half of it.

If you want to know more you can download complete Golf Rules approved by The United States Golf Association and R&A Rules Limited HERE (usga.org)

There are also a few minor rule changes for 2016.

To give you as much information as possible I searched for the 11 most often unconsciously violated golf rules and explained them so you could play according to the rules next time and take advantage of them.

1. You can’t play a provisional ball if you think you hit the water hazard

If you think your original ball may have gone into the water hazard you shouldn’t play a provisional ball. I see many golfers do that.

When I started golfing I also thought that I can play a provisional ball even if I wasn’t sure if it went in the water hazard.

However, if the original ball might be lost outside the water hazard, you should play a provisional ball (Rule 27-2).

2. Removing loose impediments and movable obstructions in the bunker

Usually you remove leaves, small stones and some other small obstacles lying beside your ball in the bunker, right? Wrong!

According to Rule 13-4c, the player should neither touch or move any loose impediment lying in or touching the same hazard.

Despite that loose impediments aren’t allowed to touch or move, you can always remove a movable obstruction. 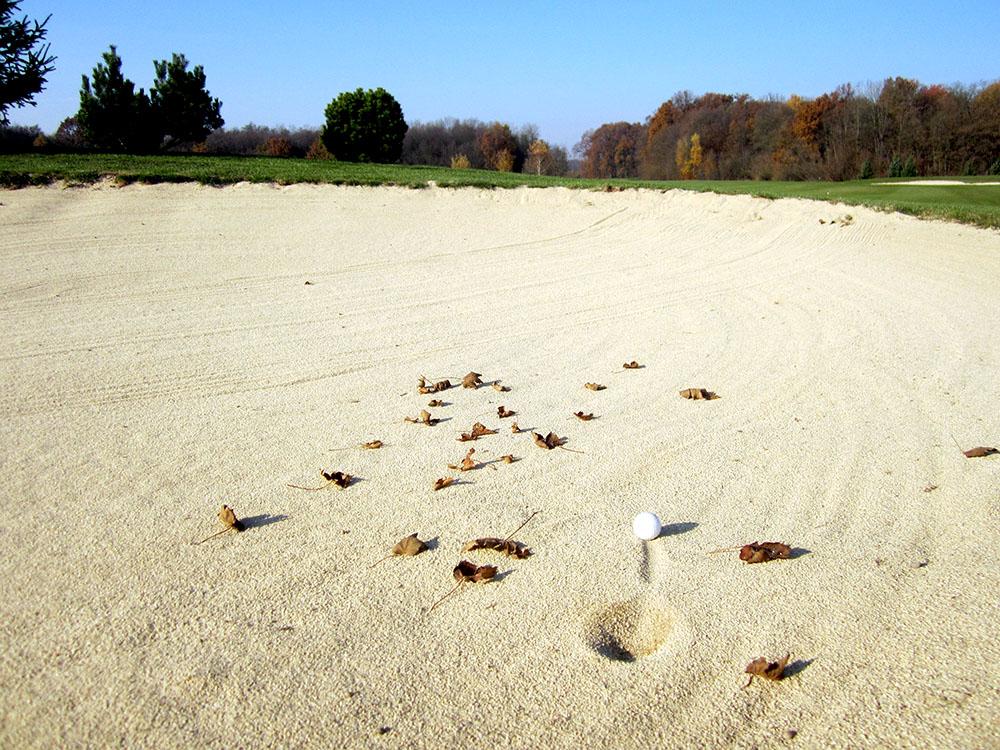 3. Ball at rest moved by player, caddie or equipment

The ball moves when we least expect it. It happened to all of us. (Rule 18-2)

Add a penalty stroke and place your ball back to the original position if:

There is no penalty stroke if the ball moves when:

“EXCEPTION: If it’s known or virtually certain that the player did not cause his ball to move, Rule 18-2b does not apply.” – R&A (randa.org)

I see a lot of golfers don’t know where they should tee the ball. You should tee your ball at or behind the imaginary line between tee markers. OK, we all know that.

What about how far backwards can you go? 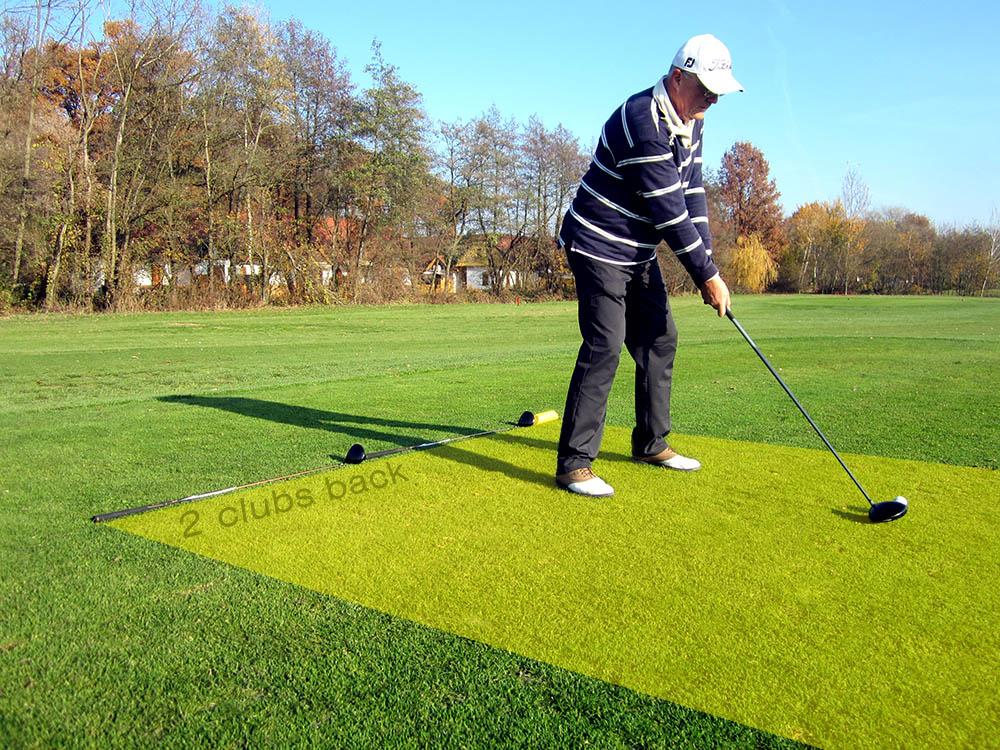 While staying between tee markers, you can tee your ball up to two club lengths back from the markers. If you play your shot from outside this area you incur a two-stroke penalty (Rule 11) and must play a ball from within the correct area.

BUT if you swing at the ball and miss it or the ball falls of the tee, it will count as a strike. Also you will have to play it as it lies with the next shot.

5. Grounding your club in a hazard

It’s pretty simple rule but a lot of golfers aren’t cautious enough. If you ground your club in a hazard you incur a two-stroke penalty. 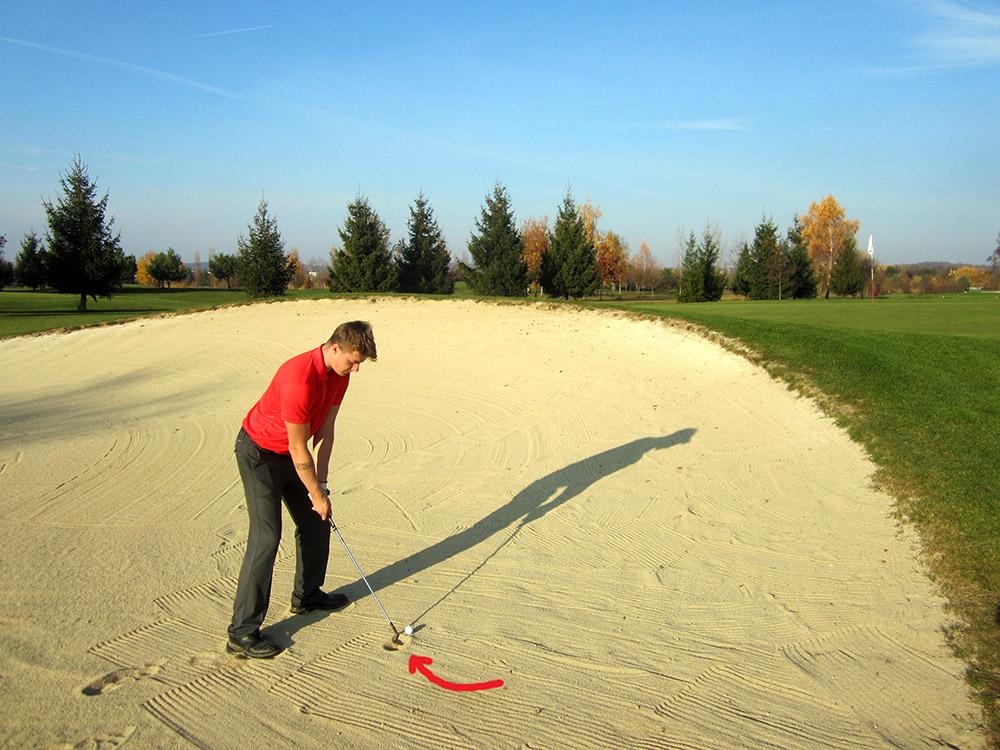 You also incur a two-stroke penalty if you make practice swing and make a contact with the ground surface.

Grounding your club means also touching the water so if you want to hit the ball out of the water make sure not to touch it before the strike.

6. Playing another ball from the tee

This one can certainly help you avoid any unwanted discussions with one of those “wise guys” on the golf course.

You can ALWAYS play a second ball from the tee under penalty of one stroke. It’s the same from the fairway (or anywhere else) as long as you try to drop the ball to the same position where you hit the previous one.

One example so you’ll understand what I’m trying to tell you:

You topped your driver shot into the water in front of the tee box and everybody says you should take 2 clubs and drop it by the water. 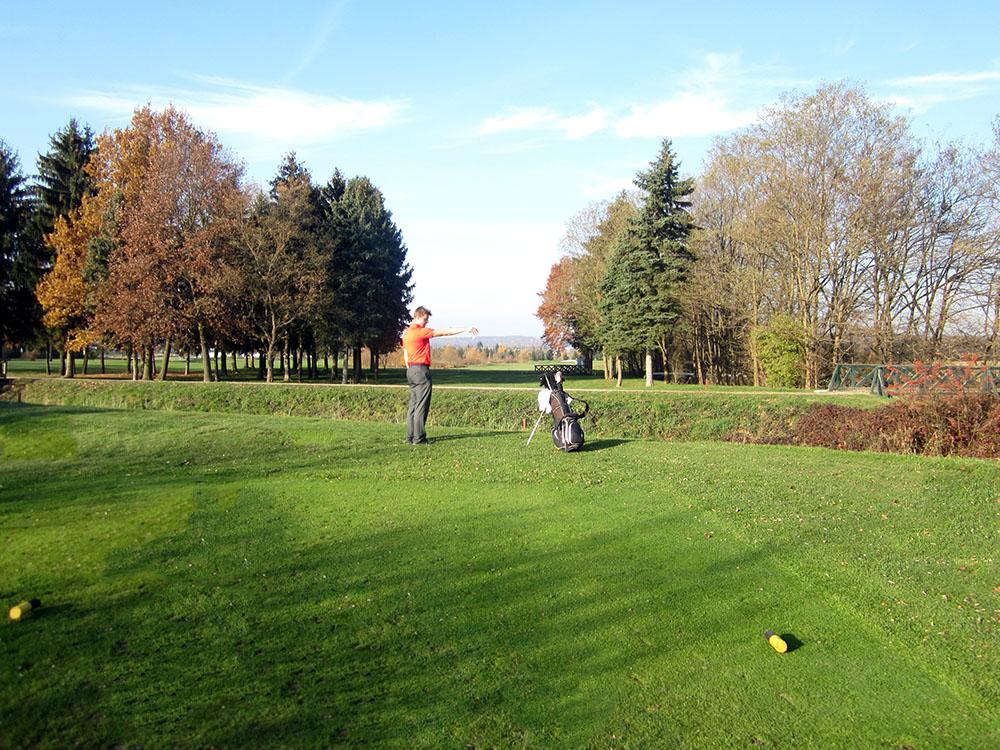 But why? Then you can’t hit a driver anymore, usually you end up in the rough. Tee the ball one more time and play with 3rd shot normally from the tee box. You can play a second ball from the tee smashing that driver and making nice up & down for a bogey.

Remember Tiger Woods at Augusta Masters 2013 when he hit the flagstick and the ball went back into the water? He also decided to play the second ball from the same position (but then went a few yards
back and made his disqualification plausible – read the whole story here ).

“Can a player verbally declare his ball to be lost? A player cannot render a ball lost by declaration; it is what the player does and what happens that matters, rather than what the player says.

A ball can only be considered lost when:

If you play the wrong ball you are penalized with 2 strokes or you lose hole in match play.

“The actual strokes taken with the wrong ball do not count on the golfer’s score. Pursuant to Rule 15-3b, a player who hits the wrong ball must correct her mistake by finding and playing her legal ball, or substituting a new ball.

If the player doesn’t correct her mistake before teeing off on the next hole, or if she fails to announce her intention to do so before leaving the last green, she is disqualified.” –golfsmith

Even an attempt of hitting someone else’s ball is a violation. If a player swings at the wrong ball he suffers a two-stroke penalty or loses the hole in match play.

Be sure to mark your ball so you could identify it’s yours! 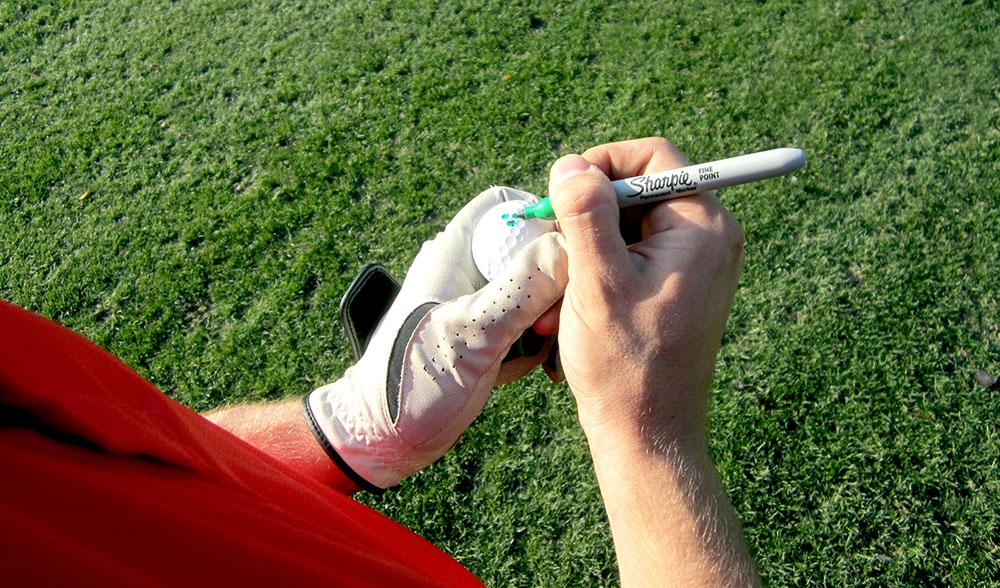 It can be also pretty uncomfortable when a player competitor plays your ball from the rough thinking it was his. After 5 min of searching you have to declare your ball as lost. Because you didn’t know you incure the stroke and distance penalty (Rule 27-1).

Even if the player brings you the ball back, 5 minutes are gone and you have already played the second ball so there’s nothing you can do. 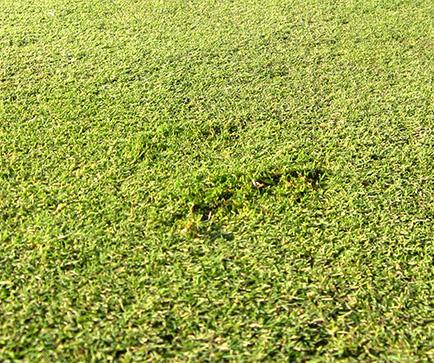 Repairing spike damages on the green is a violation of Rule 16-1a and comes with a two-shot penalty in stroke play (loss of hole in match play). By the golf rules you could gain a significant advantage by tapping down the spike marks.

What you can do is:

When you finish the hole you can repair and tap down spike marks because they aren’t affecting your game anymore.

If another player step on your putting line and scuff up the turf you can repair spike marks! You are entitled to the lie and line of play you had when your ball came to rest.

Usually we all know how to drop the ball correctly. Citing R&A : “When dropping, stand erect, hold the ball at shoulder height and arm’s length and drop it.”

On the golf course every drop is slightly different. There are some major rules on how to drop but do you know how not to drop?

There are different situations covered in Rule 20-2c when a dropped ball must be re-dropped: 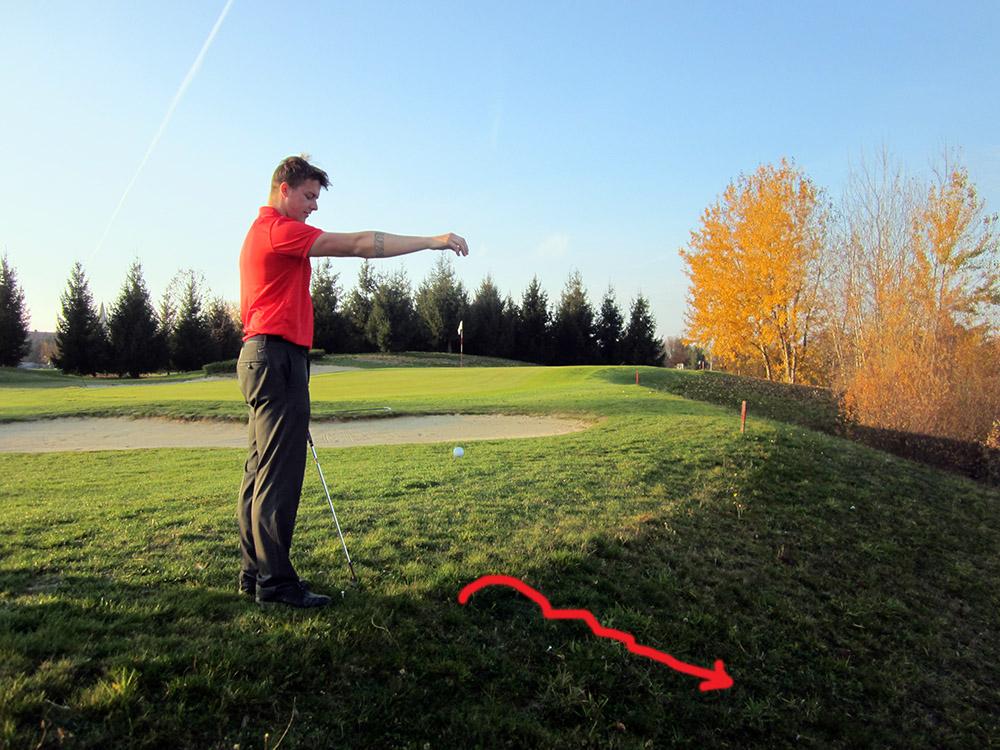 If a ball dropped for a second time rolls into any of these positions, you place it where it first struck the course when re-dropped.

One easy way to remember how many clubs away can you drop:

Length of 1 club: when you take free relief under the Rules

Length of 2 clubs: when you take a penalty drop

Giving an advice is one of the most breached golf rules. Even though golfers often give an advice to
other players you don’t see the required penalty of two strokes very often.

I must agree about that. Otherwise we wouldn’t have any topic to talk and whine about in amateur golf.

If you think about it, even a “wow how fast are the greens today” is an advice because is a suggestion that could influence a player in determining.

Don’t worry, you can still talk about which club did your colleague use etc. but you have to wait untill all the players have hit their shots so nobody is influenced by your comment.

Many times we find ourselves in a position where different obstruction is on our line of play. So what should we do? 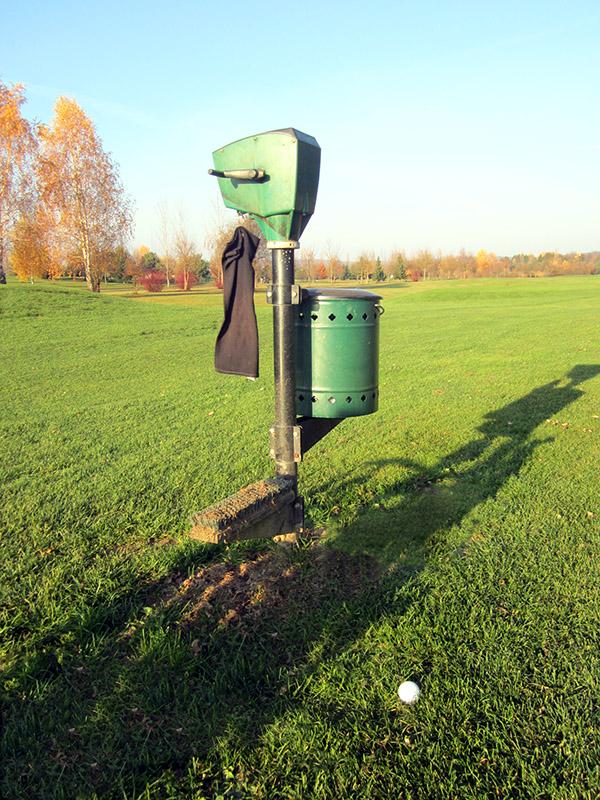 Immovable obstructions are an artificial object on the golf course that can’t be moved. When the condition physically interferes with the lie of the ball, your stance or your swing, relief without penalty is available.

If you thought golf rules are simple and that you don’t have to pay attention – you’re mistaken. I bet every one of you have found at least one rule which you violate.

I believe you can save up to 3 strokes per round with understanding the golf rules and taking advantage of free drops, reliefs…

One more advice for you – if you happen to be in a conflict with your scorer about a way of play or one of the rules, just play 2 balls and write both scores down. The referee will decide which score will count according to the Rules of Golf.

It makes no sense to argue with your scorer because you will get stressed and play worse for another 2 or more holes.

Do you understand all of the above rules or do you have any additional questions? Which one of them did you violate the most?

Leave a Reply Cancel Reply
You might also like
One of the following
Can Chess Teach Us About Golf?
3 simple ways to keep your golf clubs clean and in good condition
Why golf balls have dimples
Recent Posts