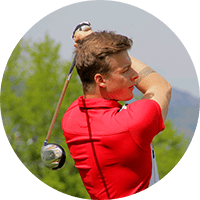 It all began five years ago. Our central figure, Žiga Mlakar from Slovenia (27, and a golf player for over 10 years), has been thinking about how to enable golfers to hit longer shots when they cannot find sufficient accuracy with the driver. He began to notice that many amateur golfers do not even carry a driver, but use woods and hybrids instead. There would be nothing questionable about that, if the first stroke wouldn’t put them so far from the green that their making par seems highly unlikely from the start. Žiga has a clear vision of how to help the players of golf with this problematic part of the game, which is why he decided to find some answers and got the idea that brought us to this point.

In golf, the precision of the tee shots is incredibly important, but so is their length. The simple fact is that greater distance and accuracy grants us a better starting position for the next shot. This also presents the greatest challenge – the further we want to hit, the less accurate we are, mostly due to the difficulty of using the driver. Drivers are designed to maximize distance, but do so at a high potential loss of accuracy. With the use of a slightly modified club, however, we could achieve a much improved accuracy at only a minimal cost to distance.

This is the purpose of the Morsh 2 wood, the club designed for all golfers. As stated above, many golfers don’t want to use the driver because of its inaccuracy. Every one of us was in this position once, when you simply don’t hit precisely enough with the driver to opt for it or you feel more confident with another club. This is precisely why we carefully designed and crafted the club that enables shots nearly as long as those made with a driver, while being far more accurate.

To everyone who asks how we knew that such a club would work, we reply: ‘We didn’t, but we tried anyway.’ It turns out that there is still room in the game of golf for improvements and advances which improve the player’s game. We hope that our story has sparked your interest and curiosity, and we will be delighted if you join us in the Morsh community and try a different kind of golf.

You can find out more about which cookies we are using or switch them off in settings.

This website uses cookies so that we can provide you with the best user experience possible. Cookie information is stored in your browser and performs functions such as recognising you when you return to our website and helping our team to understand which sections of the website you find most interesting and useful.

Strictly Necessary Cookie should be enabled at all times so that we can save your preferences for cookie settings.

If you disable this cookie, we will not be able to save your preferences. This means that every time you visit this website you will need to enable or disable cookies again.

This website uses Google Analytics to collect anonymous information such as the number of visitors to the site, and the most popular pages. We would like to display to you the most relevant content, this way our web site uses Facebook and Google Adwords cookies.

Please enable Strictly Necessary Cookies first so that we can save your preferences!